Visit http://ubi.li/e9v3u and enter AGENTORIGINS. You'll then be sent a redemption code which can be used to unlock 4 gear sets inspired by the shorts when the game is launched.
<Stuff and Nonsense />
Top

Any extra beta codes?
Send me a steam message please.

I did have a key yesterday but gave it away, sorry Pre.
<Stuff and Nonsense />
Top

I played the shit out of the beta this weekend. Here are a few of my rambling thoughts.
I don't know how long I played, but I'd guess in the 20 hour plus range.

Yes, the beta was pretty limited, 2 of the 3 base of operation wings were closed in the beta, as was everything outside of 4 skills, 1 story mission, 2 or 3 side missions and one quarter of the Dark Zone.

Performance
The world did look pretty awesome. I don't know that I saw many similar looking buildings or props. The weather effects were pretty too, from day/night cycles, to light fog, to an almost blinding white out.

I think I ran with the default settings, mostly high. I didn't run any FPS monitor but I honestly didn't notice any dips or tears or any graphical issues.

A few times when joining another player that required a server transfer I was greeted with a fun message about the service not being available and getting kicked back to the title screen. That was probably the biggest irritant. Transitions to and from the DZ are masked by a short walking through a door, or hopping over a wall animation but it really is seamless. Even a few times I was transferred to a new DZ server, you get a message about being transferred in X seconds, and you can virtually not tell that you were moved servers, it was that smooth. I was fucking impressed.

The Cheating
From day 1 there was reports of super simple cheating possible. Honestly I saw it once. I was extracting loot from the DZ and someone on my team was taking damage from nowhere and it wasn't telling him who was killing him either. He went down I think 3 times before we got the loot extracted and ran and was fine after that. That's all I experienced.

I heard it was simple to modify HP, Ammo and similar values to anything you wanted but never saw that happen in my experience. I heard of people not intentionally cheating too, where a desync would happen between the client, the server and other players and you would appear as invisible but would be running around with other people and still able to attack them. Magus and I experienced that on the last night, he saw me stuck on a repel line but I was next to him shooting. But we asked other players around us and they said they saw 2 people standing there so. /shrug

For the PVE
A lot of the city felt empty, not too many civilians wondering, not many random encounters. I hope they expand upon this for the release. It would have been nice to see more of the PVE side quests to get a better feel for the types we would experience, but the couple they had were different. One had us repairing an antenna array by climbing a building, killing some guys, hitting a button, killing some more guys and hitting another button. Pretty standard. Another had us trying to locate (Batman Arkham style) a person for someone. Finding these Echos around the area which show what happened previously there. Kinda neat. Ended up wondering around between 4 of them, killing one group of guys, and finding the person, a bit different feeling and I liked it. It wasn't a standard thing you'd have seen a hundred times already.

There were a few encounters, where a group was holding off against enemies and you were to murder the shit out of them. Pretty quick and standard. Gave ya something to do, and that's about it.

For the PVP (Dark Zone)
I have to give it up to TechDJ and Magus, when I grouped with them in the DZ, or even with a few of the nicer groups of people I joined up with when randomly matchmaking, I had a blast.
I think once I had the two available yellow tier weapons the one DZ vendor offered I stopped worrying about being killed and the game opened up a bit more at that point. It didn't really matter if I had gone rogue and died, I was having fun at that point. But at the same time I was still hitting all the DZ vendors to see if they had a slightly better weapon holster or glove or weapon mod just to get the little bit more DPS or HP.

I didn't really care to wonder around solo in the DZ, not really for fear of getting mugged, which that maybe happened once or twice randomly, I don't really remember at this point. It was just pretty boring soloing the NPCs or running past other players not caring what they are doing.

While it was annoying to get ganked trying to extract some loot and almost having it on the chopper after waiting the minute and a half after signaling for extraction because anyone for no real reason could jump you and kill you, granted they would then be marked as a rogue agent and show up on everyone's map for a short time. It's actually tense moments like that where you have an upgrade on your back that your trying to get out of the DZ that makes it worth while. Because while you died and lost what you were carrying because the person that murdered you grabbed it, you can try to track them down and take you gear back. And that is the exciting part. You win some and you lose some.

So I think the DZ really shines when you are with even one other person and you can work together to take out the NPCs or even Rogue agents that were murdering innocents.

So while I haven't pre-ordered yet, I think I will be soon. And probably even the gold version to get the additional DLC. I hope some other ATG members join in, it'll be fun.
<Stuff and Nonsense />
Top 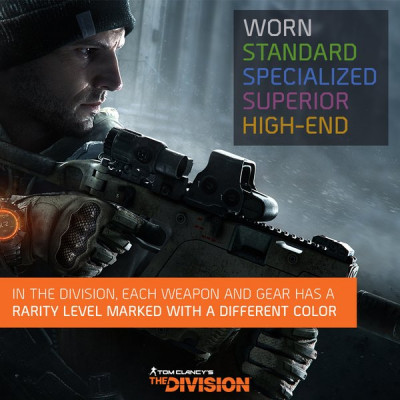 Someone on the subreddit found this website that has a lot of the skill tree and some of the perk information.

I can watch it in Canada, but I'm guessing you are saying that because you can't watch in the US?
<Stuff and Nonsense />
Top

Partial Patch notes from the Closed to Open beta.

Encounter a new faction: The Cleaners
Explore a Mass Grave while trying to restore power to the city.
Rescue the missing Engineer, Paul Rhodes

Unlock an additional Wing in the Base of Operations:

The first upgrade to the Tech Wing is now available
A new Skill can now be unlocked: The Deployable Turret

New High End weapons available in the Dark Zone
Refresh rate on Dark Zone chests has been greatly reduced
Non-player enemies in the Dark Zone have been significantly increased in number
Non-player enemies in the Dark Zone have been buffed slightly
The Manhunt Timer now pauses instead of refreshing while in combat as a level 5 Rogue
The Reward for surviving as a Rogue Agent has been increased to 1.5x the kill bounty
The Health Bar for Agents in the Dark Zone now only turns red when they actually become Rogue
A new warning icon has been added to indicate an Agent who has shot another player but has not done enough damage to go Rogue
Dark Zone experience leveling curve has been adjusted slightly
Disabled the option to transfer Dark Zone brackets as a Rogue (This prevents players using Bracket Transfer as a means to escape after becoming Rogue)
Removed some ropes that allowed players to reach areas that gave them an unfair advantage

New Ubisoft Club Action available for participating in the Open Beta unlocking an exclusive reward in-game
New and improved Tutorial Video
Tutorial video is now available to view from t he Character Select Screen
Fixed two bugs that allowed players to become invisible to other players
Fixed an exploit with Ballistic Shield Skill that allowed players to become invincible
Cheat Detection and Prevention additions and updates
Fixed mismatch of stats that occurred occasionally between Vendor Inventory and Player Inventory when item purchased
Adjusted player movement speed while running with a grenade in hand
Fixed a bug that sometimes caused other player's name and health bar to not be visible in the Dark Zone
Fixed some Weapon Mods that resulted in incorrect stat values when equipped
Fixed some weapons that didn't appear as Contaminated when obtained in the Dark Zone
Fixed a bug with the Reward Claims Vendor that caused stacks of consumables to be decreased under specific circumstances
Fixed a bug with stats display not updating when browsing Vendor Inventories
Fixed a bug that caused continuous vibration under very specific conditions
Fixed a very rare bug that prevented players from being able to fire or switch their weapons
Added mission Dialogue lines in Missing Persons: Heather Lau Side Mission
Several environment fixes to prevent falling through world issues in specific places
Multiple stability fixes (23 unique crashes fixed)
Server optimizations and improvements (players will receive less connection errors now)
Multiple localization fixes and improvements
Additional polish & bug fixes too numerous to mention!
<Stuff and Nonsense />
Top

For anyone wanting to get into the Open Beta here is what you'll need to do.

It's a substantial download so I suggest starting as early as you can.

Return to “Other Games”